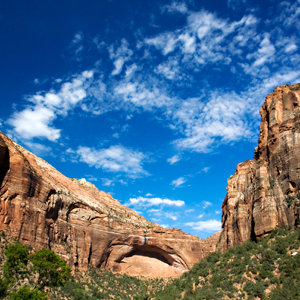 Mother Nature has loaded the West with stunning scenery, and on this National Parks tour, you’ll witness some of natures finest. From red-rock formations and breathtaking canyons to free-flowing rivers and alpine landscapes, you’ll marvel at magnificent scenery throughout this tour. This National Parks tour features Colorado National Monument, with its towering monoliths and canyons; Arches National Park, with its 2,000 preserved sandstone arches; Canyonlands National Park, with its canyons, mesas, and buttes; Dead Horse Point State Park, where massive vertical cliffs intersect with canyons carved by ice and water; Capitol Reef National Park, with one of the most scenic drives in the U.S.; Grand Staircase-Escalante National Monument, with its spectacular cliffs and terraces; Bryce Canyon National Park, where slow erosion over the ages has created fantastically sculpted rock formations; Zion National Park, a spectacle of massive stone formations; breathtaking Grand Canyon National Park; Monument Valley, where you’ll see the massive formations on a 4-wheel-drive tour; and Black Canyon of the Gunnison National Park, with its spectacular narrow opening and sheer walls. Step back in time as you visit Mesa Verde National Park, a UNESCO World Heritage Site where you’ll see the cliff dwellings that Ancestral Puebloans called home from 600 to 1300 AD. Just imagine what life was like living there! Other tour highlights include a scenic ride on the Durango & Silverton Narrow-Gauge Railroad through San Juan National Forest and a visit to the Garden of the Gods Park in Colorado Springs, with dramatic views, 300′ towering sandstone rock formations against a backdrop of snow-capped Pikes Peak and brilliant blue skies. These are just a few of the many highlights of this value-minded, picturesque vacation!

Located in the Rocky Mountains in southern Colorado. Ski area

Grand Junction, city, seat of Mesa County, western Colorado, at the junction of the Gunnison and Colorado rivers; settled 1881, incorporated as a city 1891. It is the center of a large irrigated farm and dairying region, and the focus of nearby uranium, vanadium, and oil shale production. Tourism is also economically important. The city is the seat of Mesa College (1925). Grand Mesa National Forest and Colorado National Monument are nearby.

Page is in Arizona.

Prices are per person, land or cruise only, based on double occupancy. Offer subject to availability and change without notice. Some restrictions may apply. Please ask us for details.

Charges not included in the land vacation price: airfare to and from the start of your vacation; airline baggage fees including checked and/or excess baggage fees; Federal inspection fees for the Federal U.S. Customs and Immigrations; agricultural tax; other per person taxes imposed by government entities; applicable cruise taxes, fees, fares and port charges; passports; visas and vaccinations; transfers; tips to your Tour or Cruise Director, Local Host, driver, Local Guides, and/or ships’ crew; gratuities on ferries, trains, and cruise ships; laundry; telephone; minibar; alcohol, beverages, and food outside of the contracted menu as presented at a hotel or restaurant (these extra items will be billed to you before leaving the hotel, ship, or restaurant); additional excursions and activities not listed as ‘included’ in the itinerary; porterage at airports or train stations; Travel Protection premiums; and all other items of a personal nature.

Click on the buttons below to request a quote on this deal or contact us directly with further questions or comments.

Request A Quote Send To A Friend Have A Question? Contact Us

Send To A Friend